With first record player. Christmas Eve, some year in the 1960s.

Daniel Gundlach has been involved in music all his life. Since his first onstage experience at the age of six as Little Jake in Milwaukee Lutheran High School’s production of Annie Get Your Gun, he has explored music and singing as a performer, singer, vocal coach, voice teacher, journalist, commentator, and now, podcaster.

Over the course of his career as a countertenor, Daniel has been praised as a vivid singer and actor in his appearances throughout the United States, Canada and Europe. He worked and sang with James Conlon, Alain Altinoglu, Helmuth Rilling, Marc Minkowski, John Nelson, Daniel Beckwith, Jeffrey Thomas, Charles Hazlewood, James Richman, Gwendolyn Toth, Marc Destrubé, Philip Brunelle, Neal Gittelman, and the late Newell Jenkins, among others.

Every year we would all have our pictures taken at a portrait studio. They would then paint the B&W original photos, so this is actually a painting over a photograph! 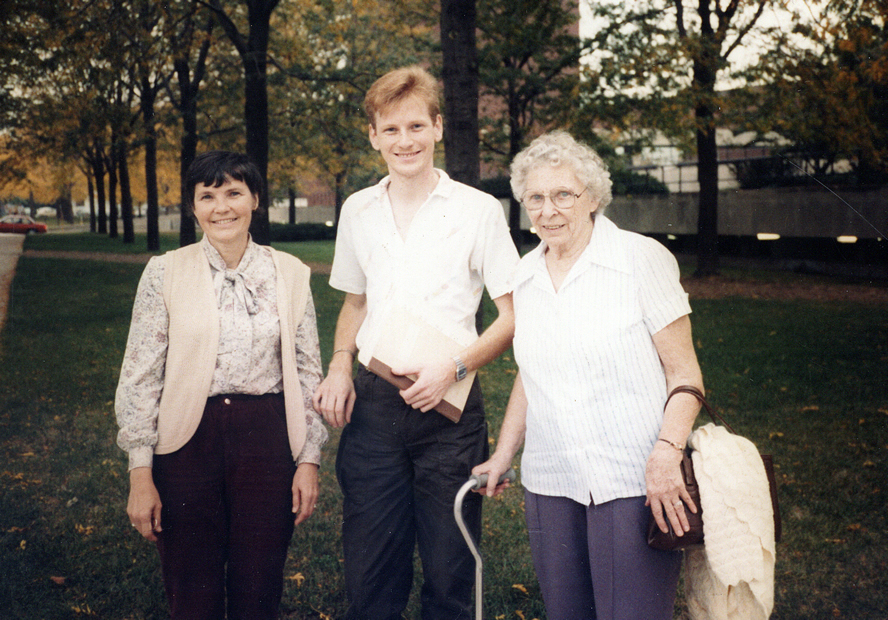 Daniel, Jane, and Frieda, University of Illinois, sometime in the 1980s

With my mother and grandmother, who had come to visit me in Urbana, where I was in graduate school. In the background you can see the famous Krannert Center. I was on my way to a rehearsal of Britten’s Cantata Misericordium. 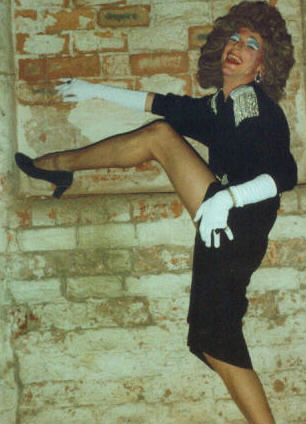 Daniel as Daniela della Scarpone backstage at the Glasgow Festival, 1989

Back in the days when I was flexible (and had a high C!)

These performances with Gran Scena constituted my first professional gig as a singer. Unforgettable experience with extraordinary colleagues. You can see that in our version there was no doubt about Santuzza’s dilemma! 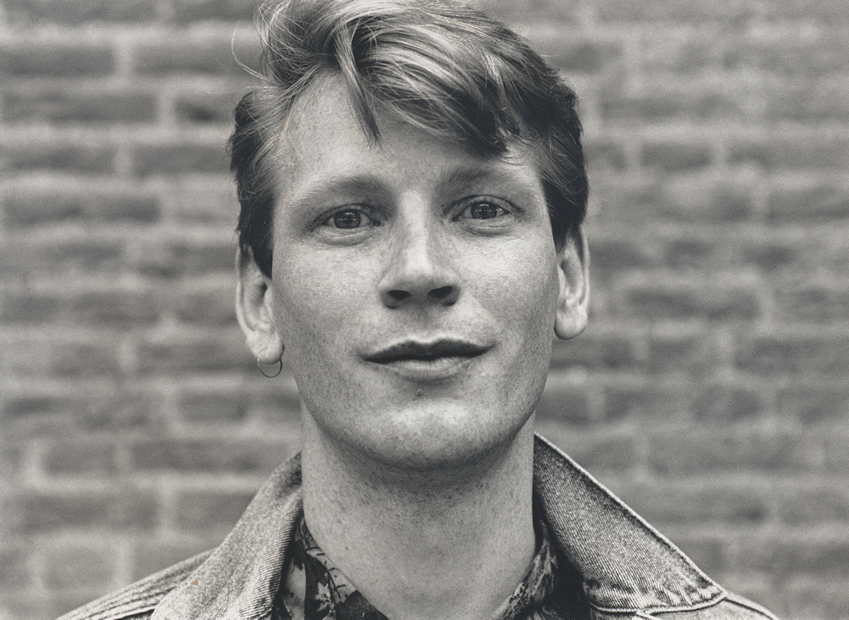 I was a finalist in the competition and didn’t have a professional headshot, so they took me outside the building and snapped this picture of me. I look at this photo now and think who was that beautiful exotic creature? 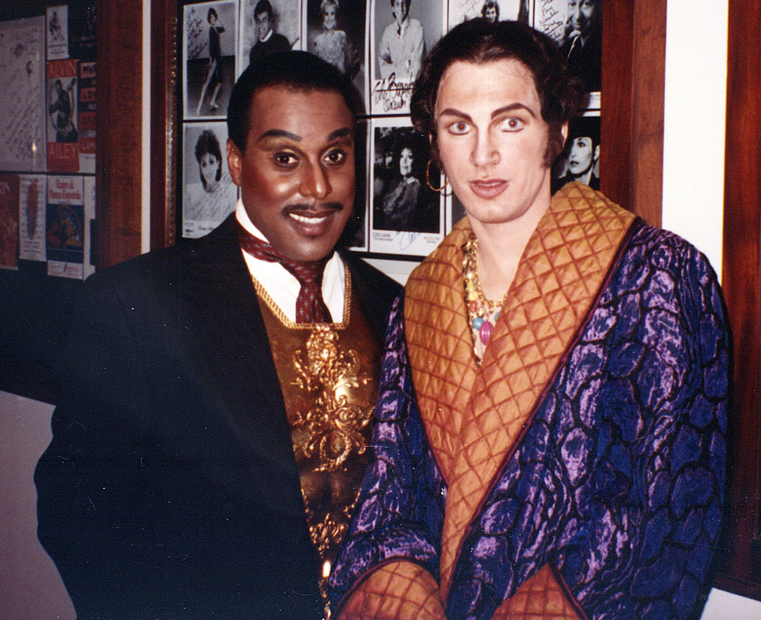 It was an unbelievably cold winter in Minneapolis, but I had a divine time singing Tolomeo in Giulio Cesare with wonderful colleagues Derek Ragin, Brenda Harris, and Marietta Simpson. 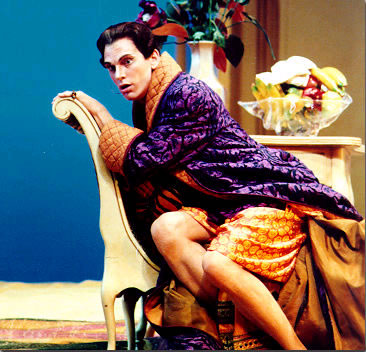 The raked stage was covered with untold tons of sand. Poor Marietta Simpson had to wear high heels! At least I got to be barefoot. 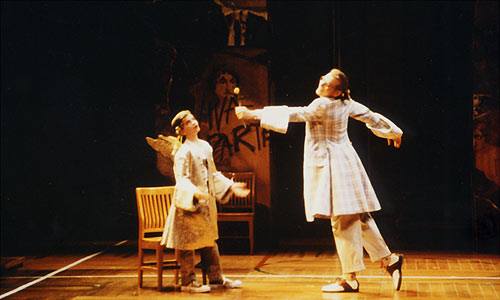 I loved this production, directed by Chas Rader-Shieber with costumes by David Zinn. It was wonderful to get to perform a role in my home town! 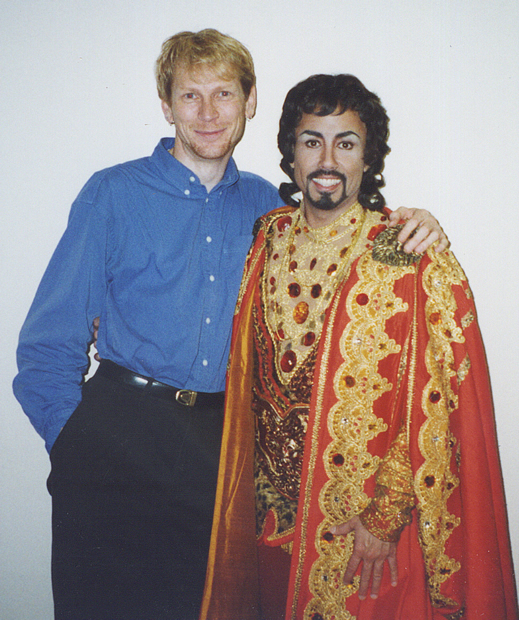 I was covering Brian as Athamas in Semele.

Daniel as the Sorceress in Dido and Æneas, ca. 1998

This was taken behind the scenes at Richardson Auditorium at Princeton, where I performed this role with Concert Royal and the New York Baroque Dance Company. 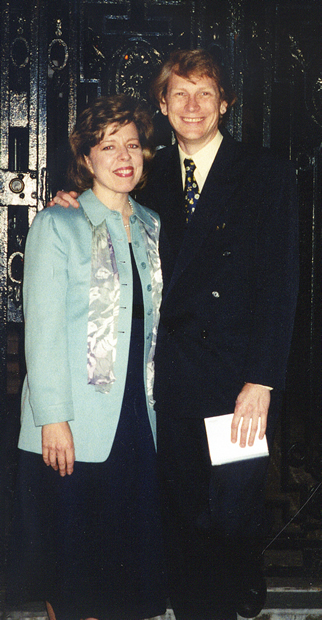 I can’t even remember when this was, but it is a wonderful commemoration of my friendship and musical collaboration with the late, great Joan Krueger, who was one of my favorite people on the face of this earth.

This ambitious project by Peter Hinton and Peter Hannan was a fascinating experiment. Here you see me wearing more clothes than I normally did in this piece! (Back when I still had a girlish figure!) 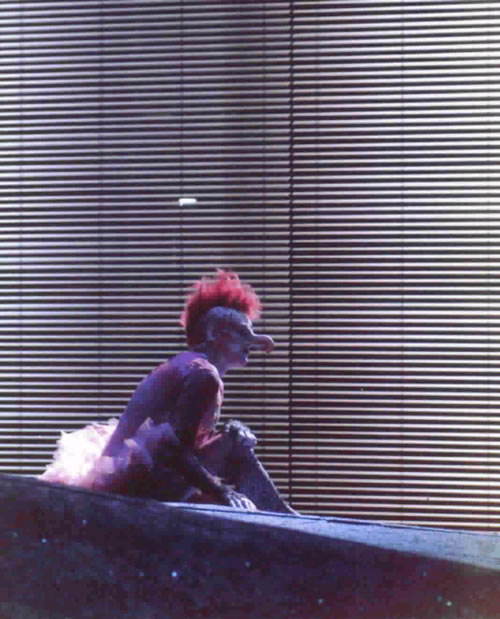 Photo by Dominique Visse, who created the role of L’Archevêque at the Bastille. I succeeded him in that role when the work was performed and recorded in Montpellier.

It was a wonderful opportunity to work on this fascinating and one of a kind opera with an amazing cast conducted by James Conlon. 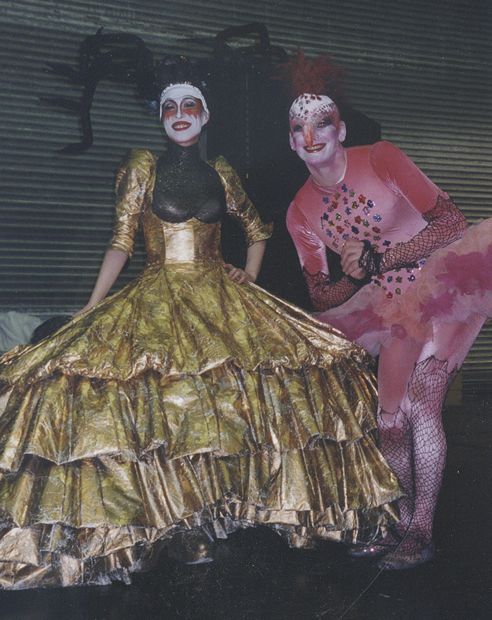 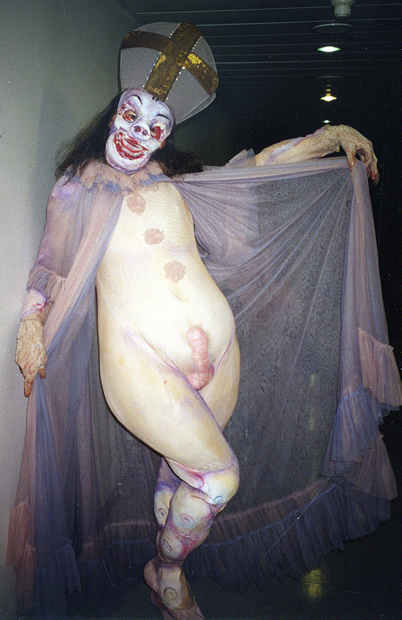 Backstage at the opera! How’s that for a costume? 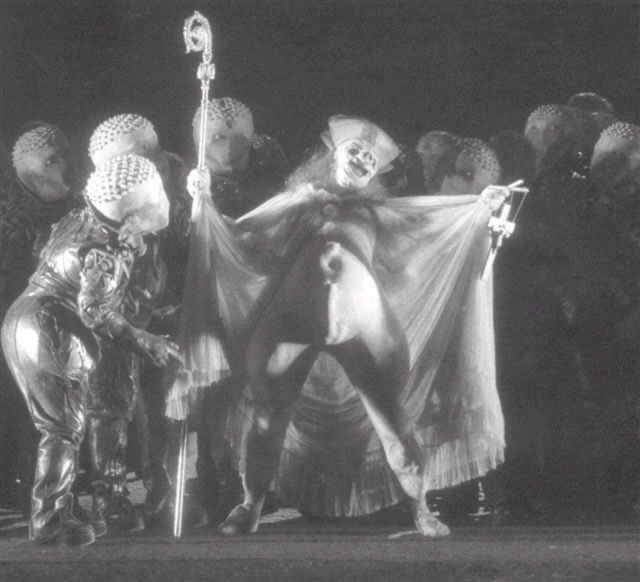 My performance in this opera was recorded live and released on the Naïve Classics label. 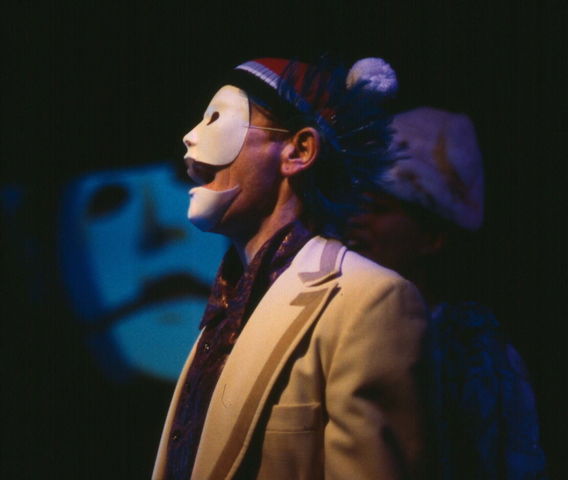 This piece, by Michael Webster and Eileen Myles, was one of Beth Morrison’s early production efforts. We performed the piece at PS 122. 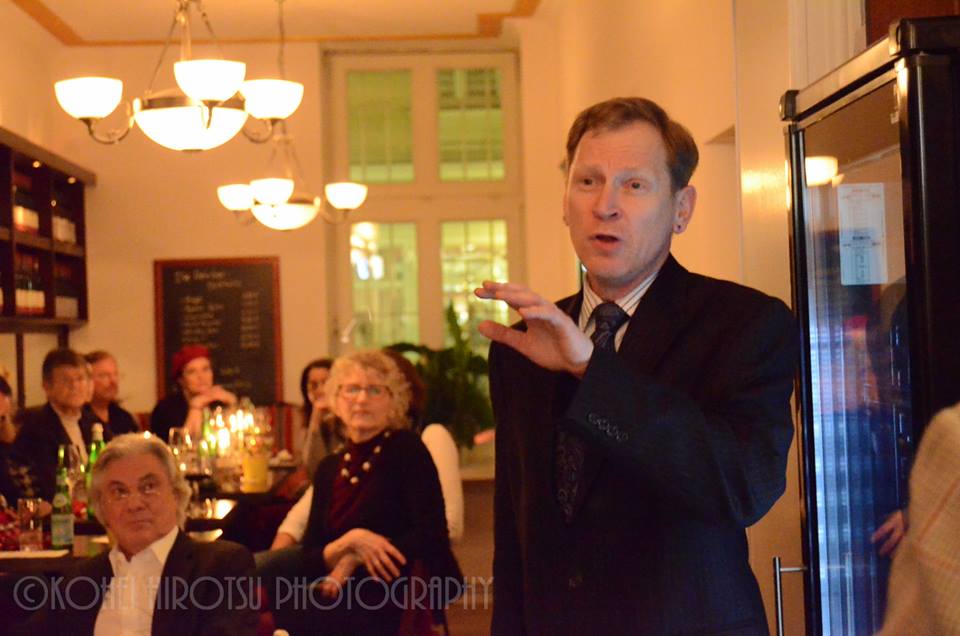 In a now-defunct venue called Weinbar. I had to sing this concert to a pre-recorded track. I recorded my own accompaniments! Photo by Kohei Hirotsu. 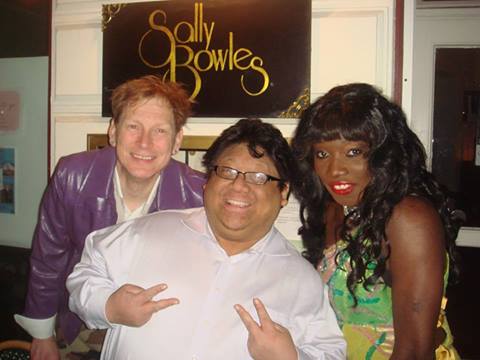 This was one of the happiest occasions of my life. My dear musical brother Lloyd Arriola came to Berlin expressly to do a concert with me. My dear friend Destynee was the “hostest with the mostest” for the event. Sadly, Lloyd departed this earth in July 2016. 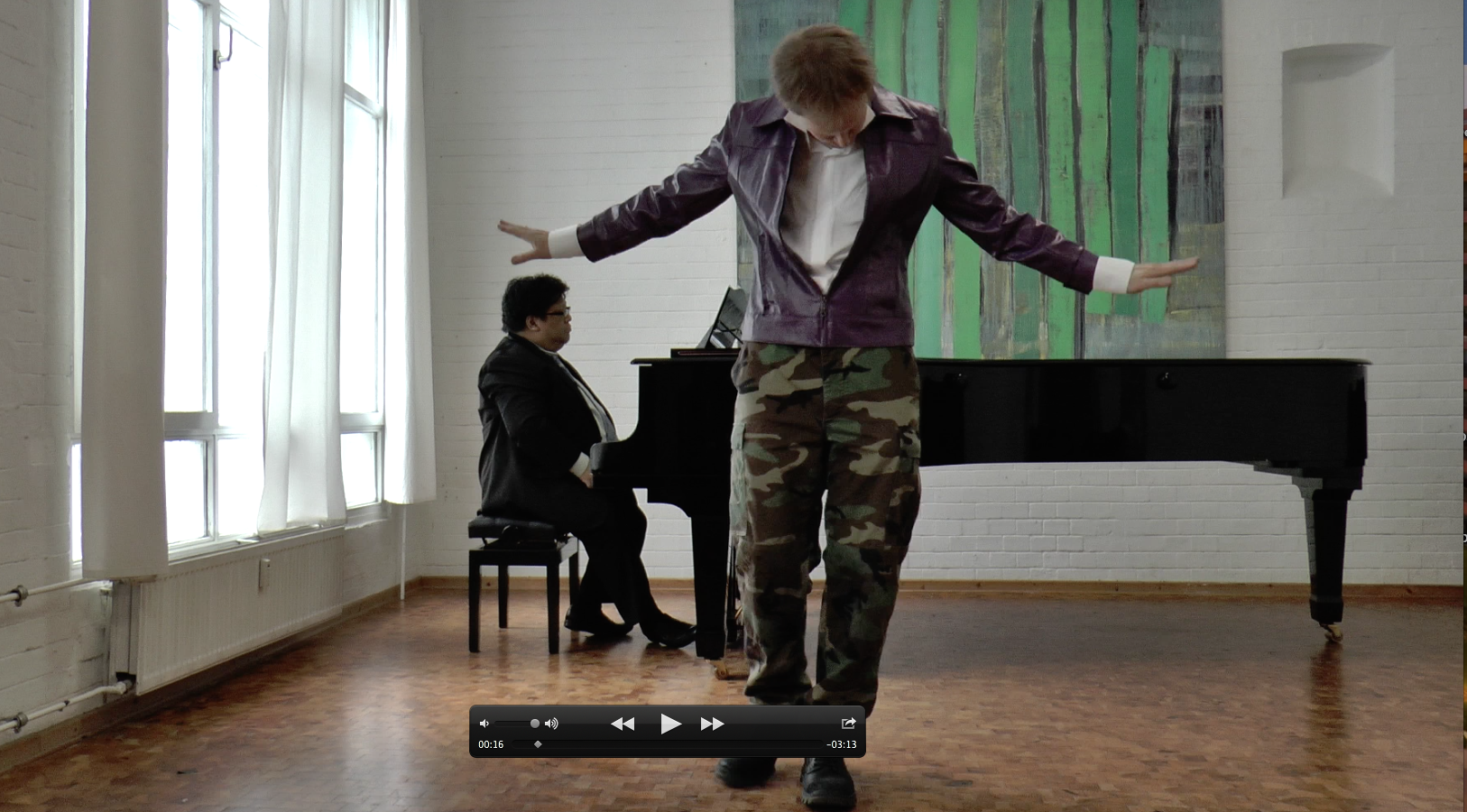 We were recording a few of our best songs for a demo. We had such plans for cabaret performances everywhere! World domination! Sadly, it ended barely before it had begun. 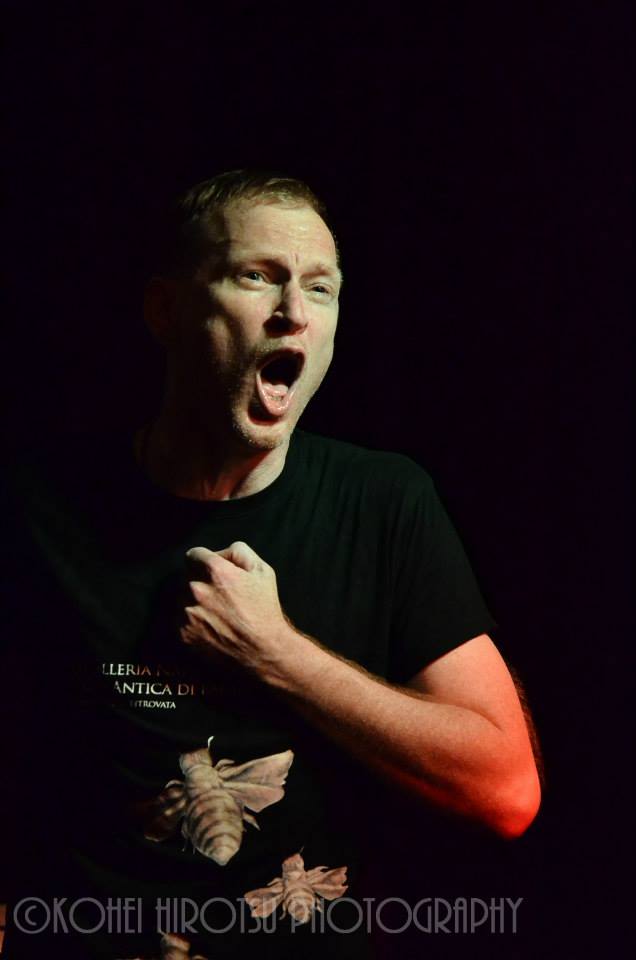 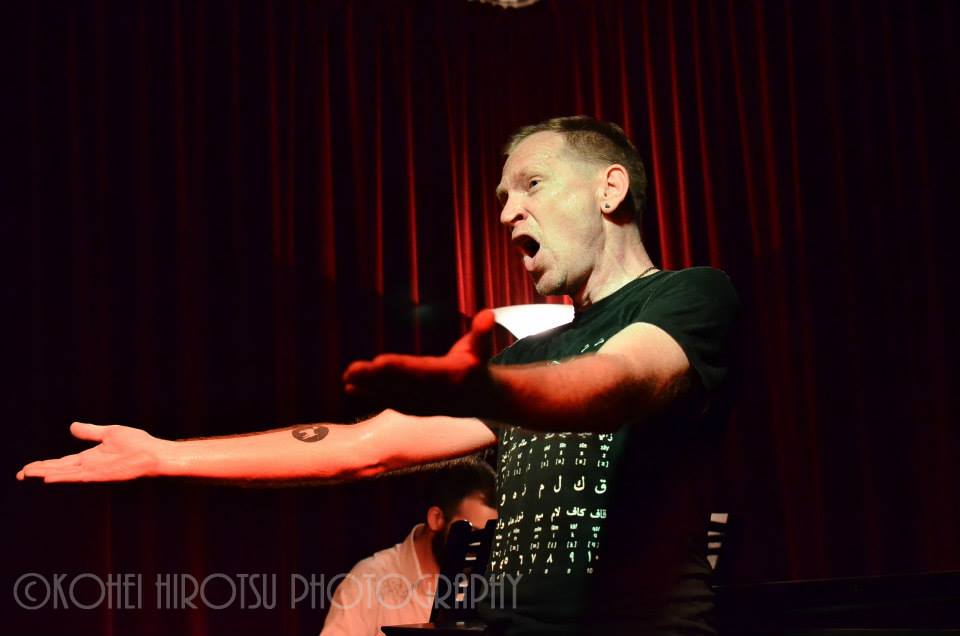 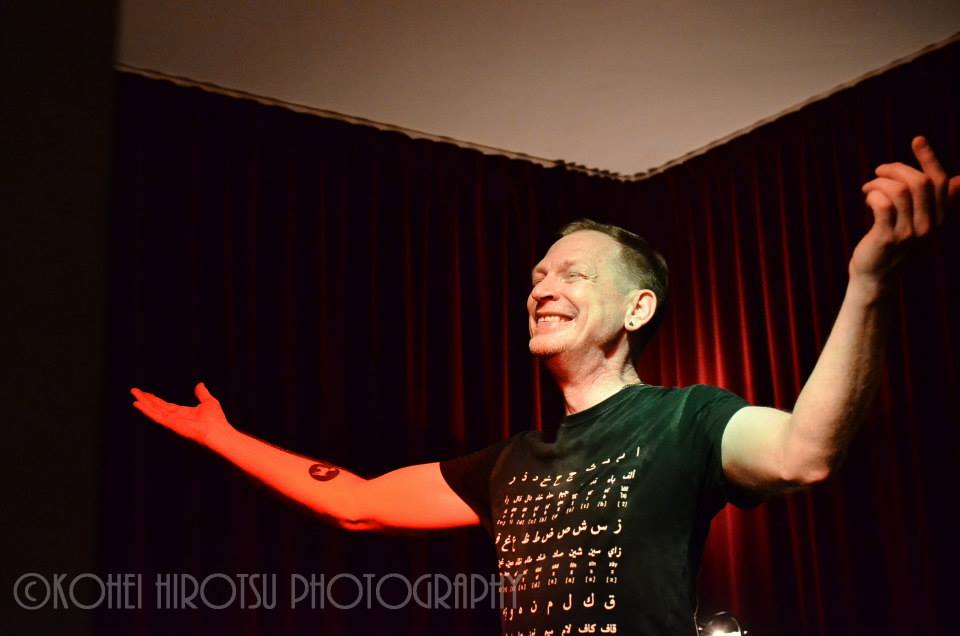 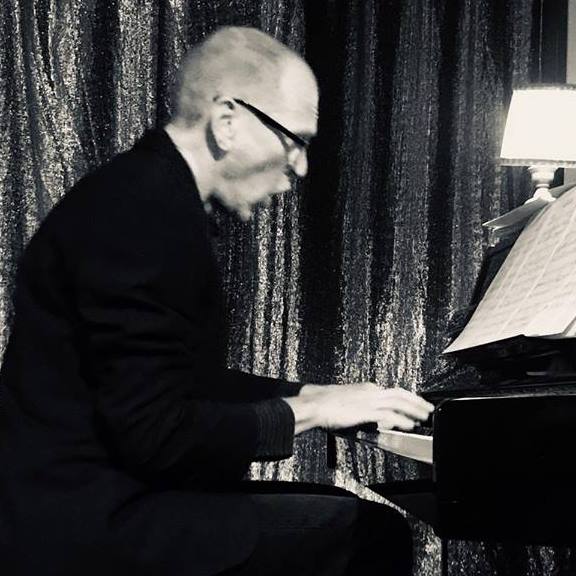 In performance in Berlin, Fall 2018

I have taken up occasionally accompanying myself in performance. An entirely new skillset! 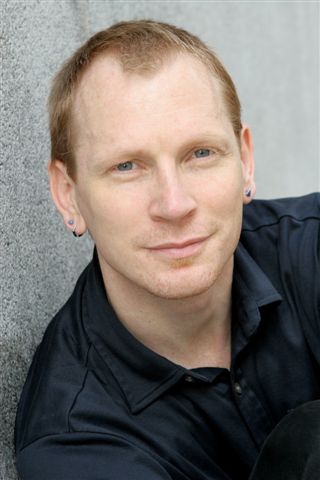 This photo was taken at the Lincoln Memorial. I wish I could remember the photographer’s name. He was Australian and was trying to break into the business in the US. 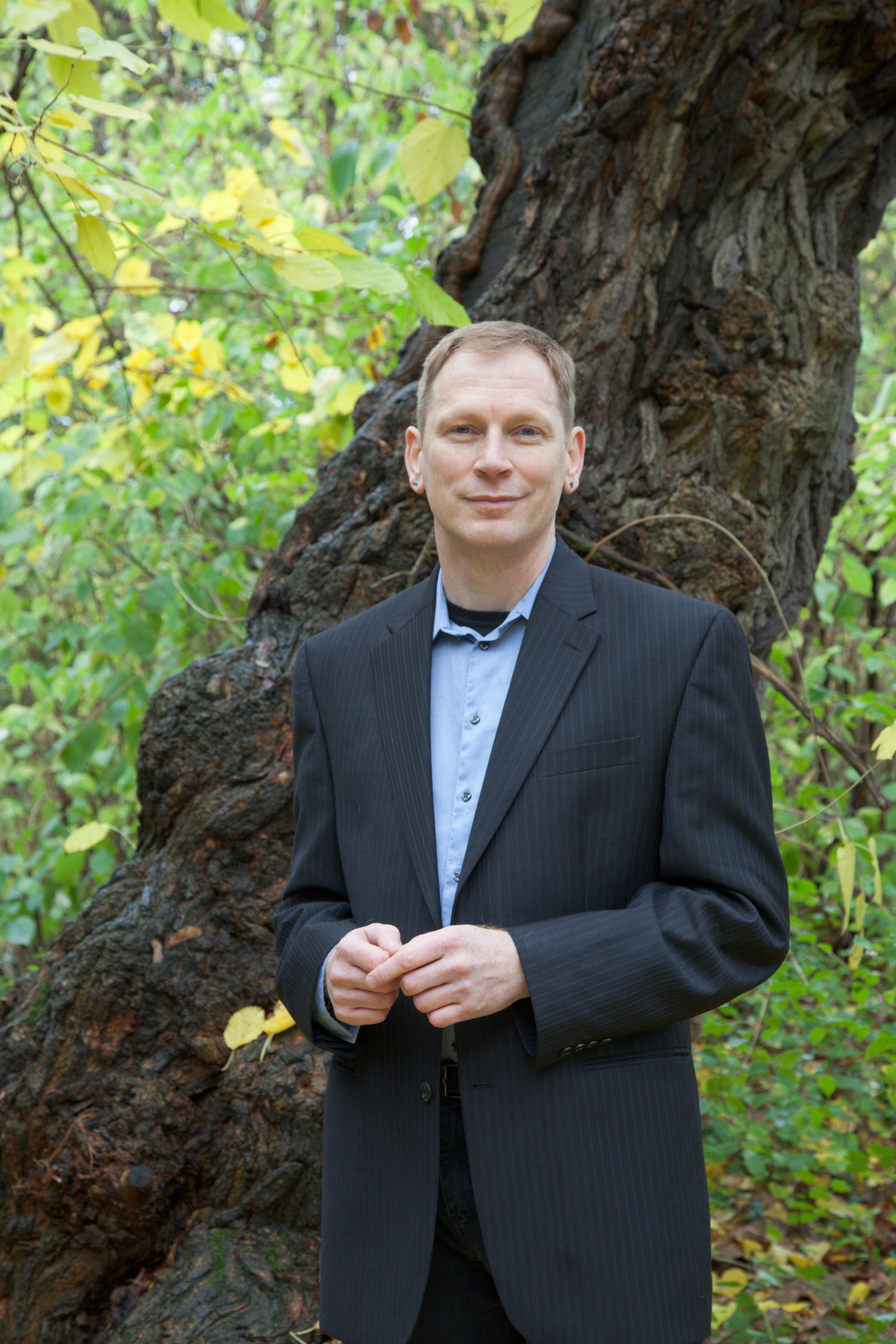 At a photoshoot (aka “ein Shooting” in German) several years ago In Viktoria Park. I now live five minutes away from this beautiful venue. 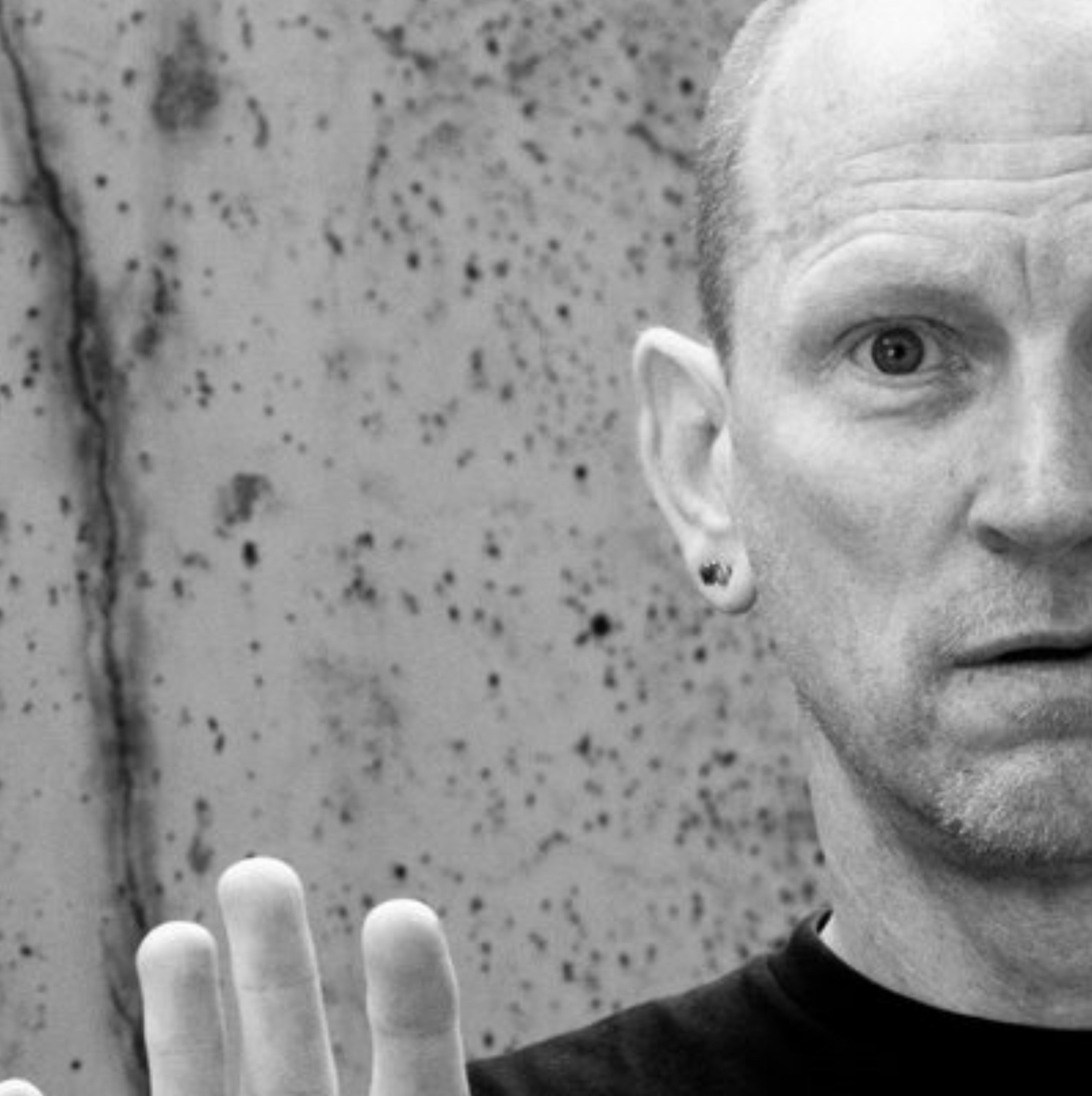 From a photo by Luca Pravato 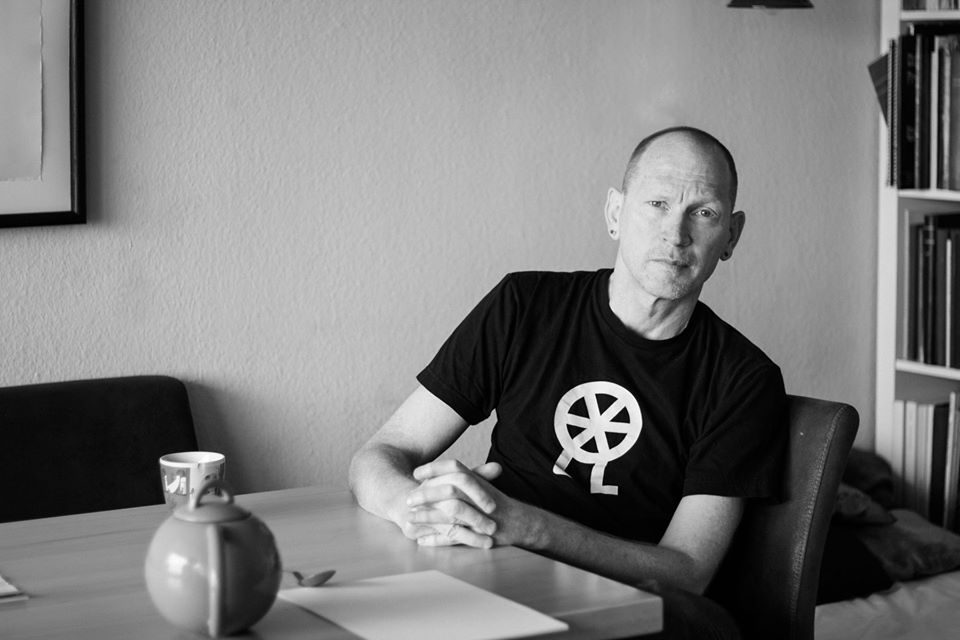 Daniel Gundlach in Berlin, May 2018

His operatic roles include Tolomeo in Giulio Cesare, Arsamene in Serse, Arsace and Armindo in Partenope, Polinesso in Ariodante, Athamas in Semele, Oberon in A Midsummer Night’s Dream, Ottone in L’incoronazione di Poppea, the Sorceress in Dido and Æneas and Zephyrus in Apollo et Hyacinthus. He created the role of La Mendiante in the world premiere of Gualtiero Dazzi’s Le Luthier de Venise at the Théâtre du Châtelet and the Opéra de Rouen Haute-Normandie. He also appeared in the joint world premiere of Pascal Dusapin’s Perelà, l’homme de fumée at the Opéra de Paris (as Le Perroquet) and at the Opéra de Montpellier (as L’Archevêque). A live recording of these latter performances has been recently released on the Naïve Classics label. His contribution to the world premiere of Peter Hinton and Peter Hannan’s controversial 120 Songs for the Marquis de Sade with Modern Baroque Opera in Vancouver was captured in a television documentary co-produced by the English and French CBC that was broadcast across Canada. His appearance with Helmuth Rilling in the telecast of an all-Vivaldi concert has been seen throughout Europe.

He appeared on the rosters of Chicago Lyric Opera, New York City Opera, Minnesota Opera, Skylight Opera, Edmonton Opera, Broomhill Opera (UK), Les Musiciens du Louvre, the Dallas Bach Society, the National Chorale, and at the Mostly Mozart Festival. He was a soloist in works by Bach (the Matthäus-Passion, Magnificat and the B Minor Mass), Couperin (the Leçons de Ténèbres), Scarlatti (the modern premiere of La Vergine Addolorata), Handel (David in Saul, the title role in Solomon, Micah in Samson, Messiah, Israel in Egypt, and Judas Maccabaeus), Purcell, Heinichen, Zelenka, Bernstein (Chichester Psalms) Orff (Carmina Burana), and PDQ Bach (Iphigenia in Brooklyn) with the Bach Collegium and the Gächinger Kantorei Stuttgart, American Bach Soloists, Clarion Music Society, Artek, Concert Royal, the Athens State Orchestra, the Dayton Philharmonic, Amor Artis, the Hawai’i Vocal Arts Ensemble, and at the Brooklyn Academy of Music. He appeared in recital on the Dame Myra Hess Memorial Concert Series in Chicago and on St. Bartholomew’s Concert Series in New York. He was featured in American Chamber Opera’s staged production of Pierrot Lunaire, which used his own English translation. He devised and commissioned a recital of duets for two countertenors entitled Conversations, which he performed with Mark Crayton and James Janssen on the Phoenix Concerts series in New York as well as in Chicago, and which featured new works by Craig Urquhart, Daron Hagen, Gilda Lyons, Michael Webster, Gregory Peebles, Elliot Z. Levine, and David and Joe Zellnik. He also appeared with Beth Morrison Productions in works by Nico Muhly (The Principles of Uncertainty, a song cycle using texts and images by Maira Kalman) and Michael Webster (Hell The Opera, performed at PS122).

At the conclusion of his studies with John Wustman at the University of Illinois, where he received his MMus in Vocal Accompanying and Performing, Daniel’s professional career began as a stint as an apprentice vocal coach at the Merola Opera Program of the San Francisco Opera, and a season of touring with the now-defunct Western Opera Theater as assistant conductor to Don Pasquale (still one of his least-favorite operas!) This was followed by a year and a half of international performances with La Gran Scena Opera Company, where he performed as Daniela della Scarpone and his roles included Amneris, Santuzza, Adriana, and important comprimaria turns as Annina and Wowkle at the Wexford Opera Festival in Ireland, the Theater des Westens in Berlin, the Bloomsbury Theatre in London and the Alte Oper in Frankfurt. Following that, he removed his gown and was a finalist in the International Vocal Competition in ’s-Hertogenbosch. From there, the world’s stages beckoned.

Since moving to Berlin in 2012, Daniel Gundlach has refocused his performing career to include performances of cabaret and pop music alongside classical song. He had a fruitful collaboration with the late Lloyd Arriola in which they performed in recital and cabaret venues in New York and Berlin. He has also had an active collaboration with the Danish tenor and performer Mads Elung-Jensen. Some of his solo cabaret programs included And the Woman Made for Man (works written by men to be performed by women); Natural Phenomena (songs across various genres on stars, roses, rain, and dreams); Schubert–Weill, Weill–Schubert, juxtaposing songs by the two composers; Hidden Meanings (songs whose lyrics concealed hidden agendas); and Diva Tribute (featuring tributes to divas including Édith Piaf, Marlene Dietrich, Dusty Springfield, Judy Garland, Barbra Streisand, and other gay icons). He continues to perform these and other programs to the occasional delight of his audiences.

In addition to his careers as performer and podcaster, Daniel Gundlach is active as a writer, voice teacher, clinician, and vocal coach. His articles on Kurt Weill’s One Touch of Venus and Leonard Bernstein’s Wonderful Town have been included in monographs and program booklets for the Staatsoperette Dresden and the Wiener Volksoper. His article, in collaboration with David Savran, on Stephen Sondheim’s Anyone Can Whistle is included in The Oxford Book of Sondheim Studies. He has authored a sizable portion of unpublished work, including children’s picture book texts, a memoir about his late canine companion Finnegan entitled A Perfect Heart, and Beautiful Savior, a young adult novel. He has also co-taught courses on musical theatre and the music of Kurt Weill at the CUNY Graduate Center and served on the Board of Directors of the Lotte Lehmann Foundation, a non-profit organization devoted to Art Song and the legacy of Lotte Lehmann, the great German soprano. He maintains a vocal studio in Berlin and conducts occasional master classes in Berlin and New York.

As Countermelody approaches its one-year anniversary, Daniel looks forward to expanding the podcast to include livestreams, video interviews, and other interactive platforms to engage with his subscribers, all in continuation of his lifelong exploration of the power of the human voice raised in song.